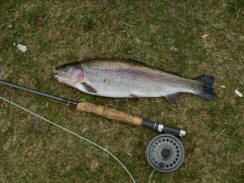 The weather looks to be warming up for the weekend and we may finally reach double figures. Forecast for Saturday looks good with cloud cover and light winds – things look even better for next week with temperatures forecast to get up to 20 Celccius

I’ve included reports from the same time of year from 5 and 10 years ago and you’ll see that it might shortly be time to try a dry fly. Alec’s Big and Ugly featured prominantly in the returns from 10 years ago so it might be worth trying a large bushy dry fly this weekend.

Top flies remain a variety of lures, black buzzers and diawl bachs on floating or midge tip lines. Best areas are the shallow end, area in front of cabin and the far bank for boat drifts.

Report from 5 years ago:

The fishing has been much better over the last week with the bank anglers doing better than the boats. The burn end is still the most productive and anglers have been taking fish on floating lines with lures, nymphs and buzzers. Quite a few big fish have been caught and carefully returned including the fine fish on the left – taken by Mr Potter on a black and green buzzer at the burn end.
A number of anglers on Saturday got well into double figures – Yellow Dancers and cut throat cats featured well in the returns.

Report from 10 years ago:

Fishing has been good and buzzers have produced good results on most days. During the warmer spells fish have been taken on dries – Alec’s Big and Ugly fly has taken lots of fish.

Two weeks ago i found myself getting organised for a night on the town with a few friends, i had fished Friday and Saturday and was probably a bit hasty in getting out after the colder snap we had just had so was a long couple of days. After eventually returning home on the Saturday […]

I thought where do i start with this then ? well it seemed only apt that i start with what i like to call my happy place since moving back from overseas. Local to Edinburgh and just 20 -30 minutes drive from the city centre you will find yourself high up the Pentland Hills which […]